One of our dear friends has done it again. Congratulations goes to Roger Racine! Can you imagine your first quilt making it all the way to Paducah? Roger did just that. He and his wife loved their trip to see the show and shared several photos with us.

Check out Roger's trip photos and his letter to us!


Hi Cheryl,
I just wanted to catch you up on my experiences in Paducah, KY. The Fall show was SO-O-O exciting, and while the only ribbon I won was a "Contestant" ribbon, my brother (who showed up all the way from New Hampshire, with his wife) said I was being treated "like a rock star." I saw, heard and learned so much from teachers, instructors and fellow sewists and quilters that I wonder how I'm going to have time to finish all the projects I have planned.
It was a true honor to be included among expert quilters from 35 states and 15 countries, including Brazil, Spain, Turkey, Italy, Canada and Japan. The Japanese entries, in particular, wowed everyone. Mostly hand-worked, their quilts exploded across the exhibit hall -- shining with exquisite silks, embroidery and original designs that delighted the eye and boggled the mind.
Medallion-style quilts counted among the top winners. with bright colors and needle-sharp points and angles edging out entries in browns and more muted tones and designs.
The pace of the contest and its attendees was slower and more relaxed, I'm told, than its Spring counterpart. Parking was manageable, and shuttle buses and trolleys efficiently transported participants back and forth between the Convention Center, the major hotels and various other local attractions (including the awesome National Quilt Museum). But the smaller crowd sizes prompted rumors that this would be the Fall Show's final year. Show officials would not confirm or deny those rumors, saying it would be some time before a final decision was made. Personally, my wife and I (not being in our teens or 20s anymore) welcomed the more leisurely pace and would be reluctant to fight the crowds described by those who've been to the Spring show. But that may be just us.
Overall, it was an experience I wouldn't have missed for the world. As quilters, what a marvelous worldwide "community" we live in.
Gratefully,
Roger R. Racine

Download the April Spinner and grab your Squedge 22.5 today! 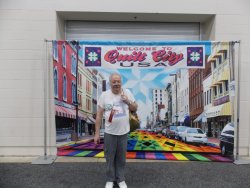 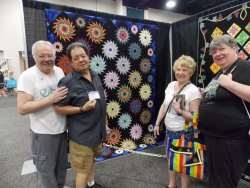 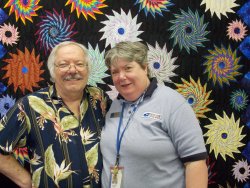 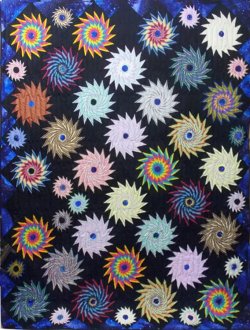